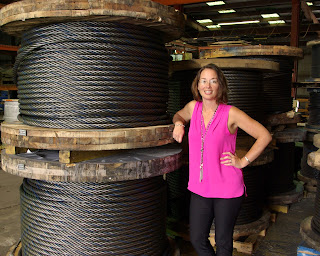 Trident Tech alum Jessica Sage never imagined that she would someday take over the family business, Charleston’s Rigging & Marine Hardware Inc. (DBA Carolina’s Rigging) with her brother, Skip.  In fact, their father, Rick Sawin, was always very much against it.

“He saw too many businesses fail after the next generation took over,” says Jessica.

After graduating from Wando High School, Jessica was not sure exactly what she wanted to do, so she enrolled at Trident Technical College. It was there, while taking a class with TTC Instructor Michael Reed, she discovered an interest in environmental technology. Reed served as a mentor to her and strongly encouraged her to transfer to College of Charleston, where she graduated with a Bachelor of Science in biology.

Soon after graduation, she found success working for ArborGen, Inc., a provider of conventional and advanced genetics tree seedling products, and was named on a patented process of harvesting plant embryos for large-scale tree production. She enjoyed the multicultural exposure and her work very much.

Then one day over Thanksgiving dinner, her parents broke the news.

“My dad says, ‘Pass the butter. We are going to sell the business’ just like that,” says Jessica. “We were both shocked.”

Much to their own surprise, Jessica and Skip realized that they didn’t want to let it go - it was too much a part of them - so they came up with a plan to buy the business and allow their parents to retire.

“There was a lot to get through and we hired several consultants to make sure we didn’t lose the ‘family’ in the transition of the family business,” Jessica says.

Now her parents are happily enjoying their retirement and the siblings have been co-owners since 2011. They currently operate in three locations and have 40 employees. The challenge now is finding skilled employees.

“For a long time, everybody thought their child should go to a four-year school. Now we have a skills gap because nobody wanted to consider vocational training,” she says.

And as a graduate of Trident Technical College, she sees the value many technical programs can bring to the industry, “the training is here and the jobs are here, we just need folks to understand that you can make a very good living and not have to wear a suit and tie every day.”

Although Jessica prefers dresses, she always has her steel toed shoes under her desk. She is an active member in the Women Presidents’ Organization and the Maritime Association of South Carolina, and she was recently chosen as the 2017 Woman of the Year by Charleston Women in International Trade (CWIT). This was is a huge honor, as past recipients include Anita Zucker (Chair and CEO of The InterTech Group) and Barbara Melvin (SC Ports Authority).

Jessica says that not being groomed to take over the family business may have been the best thing that ever happened to her. Attending college and working in another industry gave her perspective and experience.

“I look back on my time at TTC as the beginning of everything,” she said. Jessica attended TTC with classmates from the closed Navy base that were working on a second career in life, so a diverse age group provided wonderful preparation for the real world work environment.

“It is the perfect place to learn who you are and who you want to be.”

Behind the Front Lines

August 25, 2020
Dillon Spires was in his last semester at Trident Technical College and nearing graduation from the Medical Laboratory Technical (MLT) program last Spring when COVID-19 hit. “I remember walking into clinical thinking that COVID-19 would certainly become an issue soon. That same day clinicals were canceled until further notice,” he said. While this could have delayed his graduation from the program, MLT faculty worked with him to fulfill the remaining clinical requirement. He was already working as a Lab Assistant at Roper St. Francis Mount Pleasant Hospital, so he was able to use some of his work experience to fulfill clinical requirements and schedule training time for the areas that he still needed clinical experience. Spires joined the Air Force in 2011 after graduating high school in Eastman, Ga. He served for seven years, first in Omaha, Nebraska supporting reconnaissance aircraft and then at Joint Base Charleston supporting C-17 aircraft. He met his future wife in Nebraska and t
Post a Comment
Read more

Training the Next Generation of Auto Mechanics

October 01, 2020
Where do new auto mechanics come from? One pathway that continues to grow every year is the Charleston Regional Youth Apprenticeship Program (CRYA) .  Trident Technical College, in collaboration with regional employers in a variety of industries, offers students the opportunity to get paid to learn as youth apprentices. High school students hired as apprentices receive paid on-the-job training along with classroom instruction at TTC. The Hendrick Automotive Group employs many youth apprentices.  Don Smith, community relations guru at Hendrick, said, “We have young men and women looking for opportunities in the automotive field. With technology increasing in automobiles today, we need people with new skills for tomorrow. With the Trident Tech partnership, we hope we can fill the pipeline in the Charleston market with auto techs to fit those demands.” Buzz Varella, department head of the TTC Automotive Program , is sold on the program as well. “The apprenticeship program is a tre
Post a Comment
Read more

August 25, 2020
Moving can be difficult for most teenagers, but when it's to another country, it can be even more intimidating. America Martinez Gonzalez moved to the United States from Mexico with her parents at the age of 18.   She eventually learned English by watching the television show, "Friends. " She says, “Because of the language barrier, I felt so insecure about meeting new people. But "Friends" helped me overcome the struggle and I laughed a lot while doing so.” Now she has two teenagers of her own and is one semester away from getting her associate degree in Baking and Pastry at the Culinary Institute of Charleston at Trident Technical College .  Her dream is to open a Hispanic bakery. For years Gonzalez would drive by Thornley Campus in North Charleston thinking how nice it must be to study there. At the time, she did not have a social security number, a high school diploma or the money to go to college. She thought the American dream was beyond her reach.
Post a Comment
Read more