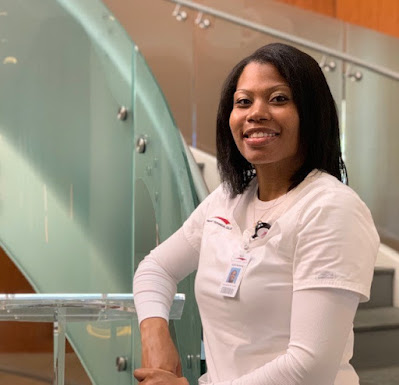 Coqui-Anna Turner has always had a lot on her plate.
Growing up in upstate NY among five siblings and absentee parents, she learned to take care of herself. She worked hard in school because she knew that education was the way out of poverty. And although neither of her parents went to college, “It was always just a given that we would all go,” she said.

But it's not always that simple.
Turner became pregnant and had a child in high school, which complicated her plans, but she remained steadfast in her focus, and with support from her family, she earned an Associate Degree in medical assisting.

Turner enjoyed working as a medical assistant because she was able to gain experience in many different areas of the hospital. After several years, she decided she wanted to take her career to the next level and become a nurse, and she wanted that to happen in Charleston.

“My grandmother is from Charleston and we grew up visiting the area. I just knew I would always end up here,” she said.

Now a single mother of two, Turner is in her second semester at Trident Tech. She loves the program but admits it is extremely challenging.

“It’s almost impossible to have even a part-time job with classes and clinicals,” she said.

Turner manages to work about 20 hours a week at a local primary care facility. It's not enough to cover all of her expenses and without any other financial support, she does everything she can to get assistance. She was recently approved for public housing, which reduces her rent from $950 to $450.

“It’s just a stepping-stone until I graduate and get a job. I want to teach my kids that with education and hard work you can achieve anything you want.”

As a Dean’s List student, Turner has received TTC Foundation scholarships for the past two years, which, she says, helped tremendously.

“Receiving the scholarships not only assisted me financially but emotionally. It has validated my belief in people, knowing that even strangers can support your dreams,” she said.

This year, Turner received the Anne and Rose Carrigan Endowed Nursing Scholarship. The scholarship was established by Fran Hawk, in honor of her mother and grandmother. Before that, Hawk had been sponsoring local students by introducing them to Trident Tech and financially supporting their education. But only one of the students went on to graduate.

“I was disappointed in myself,” Hawk said. “I thought it would be a good idea to let the experts handle it.”

She turned over the reins to the TTC Foundation scholarship program. Not long after, her husband John surprised her for her birthday by adding funds to endow the scholarship so that it can provide assistance well into the future.

As an educator, author and advocate of public education, Hawk chose Trident Technical College for her scholarship because she recognizes the importance of the college in the community and the positive impact it has on workforce development.

“I respect the college’s mission and admire its president, Mary Thornley. It is evident that our community sees the impact as well,” she said.

With the cancellation of the scholarship luncheon (due to the pandemic), Hawk and Turner will not have an immediate opportunity to meet in person, but both women look forward to meeting one day soon.

In the meantime, Turner said she is even more determined to achieve her goals.

“I was already motivated to succeed, but now I have another reason,” said Turner. “I have to make good on the investment Mrs. Hawk has made in me.”

Behind the Front Lines

August 25, 2020
Dillon Spires was in his last semester at Trident Technical College and nearing graduation from the Medical Laboratory Technical (MLT) program last Spring when COVID-19 hit. “I remember walking into clinical thinking that COVID-19 would certainly become an issue soon. That same day clinicals were canceled until further notice,” he said. While this could have delayed his graduation from the program, MLT faculty worked with him to fulfill the remaining clinical requirement. He was already working as a Lab Assistant at Roper St. Francis Mount Pleasant Hospital, so he was able to use some of his work experience to fulfill clinical requirements and schedule training time for the areas that he still needed clinical experience. Spires joined the Air Force in 2011 after graduating high school in Eastman, Ga. He served for seven years, first in Omaha, Nebraska supporting reconnaissance aircraft and then at Joint Base Charleston supporting C-17 aircraft. He met his future wife in Nebraska and t
Post a Comment
Read more

Training the Next Generation of Auto Mechanics

October 01, 2020
Where do new auto mechanics come from? One pathway that continues to grow every year is the Charleston Regional Youth Apprenticeship Program (CRYA) .  Trident Technical College, in collaboration with regional employers in a variety of industries, offers students the opportunity to get paid to learn as youth apprentices. High school students hired as apprentices receive paid on-the-job training along with classroom instruction at TTC. The Hendrick Automotive Group employs many youth apprentices.  Don Smith, community relations guru at Hendrick, said, “We have young men and women looking for opportunities in the automotive field. With technology increasing in automobiles today, we need people with new skills for tomorrow. With the Trident Tech partnership, we hope we can fill the pipeline in the Charleston market with auto techs to fit those demands.” Buzz Varella, department head of the TTC Automotive Program , is sold on the program as well. “The apprenticeship program is a tre
Post a Comment
Read more

August 25, 2020
Moving can be difficult for most teenagers, but when it's to another country, it can be even more intimidating. America Martinez Gonzalez moved to the United States from Mexico with her parents at the age of 18.   She eventually learned English by watching the television show, "Friends. " She says, “Because of the language barrier, I felt so insecure about meeting new people. But "Friends" helped me overcome the struggle and I laughed a lot while doing so.” Now she has two teenagers of her own and is one semester away from getting her associate degree in Baking and Pastry at the Culinary Institute of Charleston at Trident Technical College .  Her dream is to open a Hispanic bakery. For years Gonzalez would drive by Thornley Campus in North Charleston thinking how nice it must be to study there. At the time, she did not have a social security number, a high school diploma or the money to go to college. She thought the American dream was beyond her reach.
Post a Comment
Read more