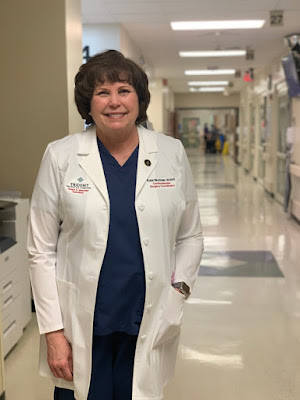 Trident Tech alum Robin Workman may not be on the front lines, but she is doing her very best to support those who are.

“It started as a partnership with the University of South Carolina, and if we didn’t pass there was a chance the program at Trident Tech would not receive accreditation,” she says. "No accreditation meant no degree."

That was not an option for Workman and her classmates, who had all worked hard to get accepted into the program and needed it to succeed. There were no do-overs. Many of them were married and had children so they banded together to support one another.

“We were tight. It was all for one and one for all,” she says. “I think that is why we were successful.”
Workman remembers the day she found out she had passed her nursing licensure exams. She was sleeping off a night shift at the hospital when her husband woke her up and told her that an envelope had arrived.

“I was so tired and still half asleep. All I could say was ‘is it a large envelope or small envelope?’ before falling back asleep,” she says. “I already knew a small envelope meant you passed.”


Workman didn't always want to become a nurse. She knew she wanted to go to college, but not sure how she was going to get there. She would be the first in her family and her parents could not afford to send her.

She decided the best way was to join the military and receive funding through the GI Bill. She served four years in the Air Force before making the decision not to reenlist so that she could help take care of her mother, who was struggling with diabetes and heart disease.

After witnessing the excellent care her mother was receiving, she made the decision to enter nursing school.

"I paid close attention to the nurses who took care of her and they inspired me," she says.

After graduating, Workman went to work for Trident Medical Center. There she was part of another “first," as one of the original 12 nurses chosen to open the coronary care unit in the late ’80s.

Her career took her in several different directions, as the careers of most nurses do. But she returned to Trident in 2001 in the role she continues in today.

And although she continued her education, completing her Bachelor of Science in Nursing, Workman will always hold Trident Tech close to her heart.

“The most important degree I received was from Trident Tech,” she says with a smile.

Note: Photos were taken before the COVID-19 pandemic required more widespread use of face masks.

August 23, 2019
Earning a college degree is challenging enough. But for single parents, it can seem like an insurmountable feat. Costs like living expenses and childcare only add to the stress of paying tuition. Making time to study usually means waiting until after the kids are in bed, leading to added exhaustion and stress.

When Joyce Antonetty attended Trident Technical College as a single parent of two young children, she knew it would be difficult. But she was determined to fulfill her lifelong dream of becoming a Fitness Specialist.
“I wanted to help people become a healthier version of themselves,” says Joyce.
Joyce had been down this road before. Like many Trident Tech students, she had attended a four-year college immediately after high school. But when she was waitlisted to enter the Physical Therapy program at MUSC, she postponed her dream in order to start a family.
Joyce's life took an unexpected turn when she went through a divorce in 2010. She held several respectable but unfulfill…
2 comments
Read more

I’m sure as you are beginning to read my essay, you are wondering why I entitled it “Lagniappe.” You may even be wondering how to pronounce the word or what it could possibly mean. Lagniappe [lan yap] – noun. Something given as a bonus or extra gift. Synonyms: Reward. Prize. Bonus. Incentive. Now it may be a little bit clearer as to why I chose the Cajun French word of Lagniappe to describe my experience at Trident Technical College. Now, let’s look at the definition of the word college. College – noun. An educational institution or establishment, in particular, one providing higher education or specialized training. Albeit, TTC does provide higher education and professional training for many students each term, it is truly so much more than that.

I started at Trident in the Fall of 2017 with one goal in mind; obtain my nursing degree. Like many students, this would be my second degree. I had just graduated a few mo…
Post a Comment
Read more